John Moore, utility commissioner for Kaukauna, received the WPPI Energy Distinguished Service Award. The award recognizes public officials for their active participation with WPPI Energy and outstanding contributions to the success of the organization.

Moore serves as a Kaukauna Utilities commissioner, president of the City of Kaukauna Common Council, commissioner of the Kaukauna Housing Authority and Redevelopment Authority, and he actively attends legislative rallies and conferences held by the American Public Power Association, the Municipal Electric Utilities of Wisconsin, and WPPI.

“John’s work to advocate and build awareness about energy policy issues benefits all 51 WPPI member utilities and their local customers,” said Feldt. “He has been involved with our community, our utility, and our joint action agency for a long time, and the work he does is incredibly valued.”

“Not only does John share Jim’s commitment to public service, he and his wife Amy were longtime friends of Jim and his wife, Carol,” added Feldt. ”So, it is especially fitting for John to be the first recipient of this honor under its new name.” 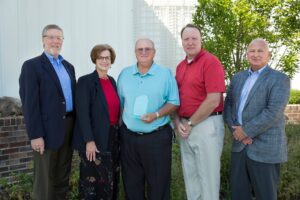