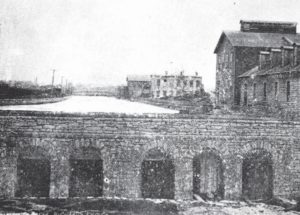 The first utilization of the power of the Fox River, according to the early records of the Grignon family, was made by Augustin Grignon, who built a grist mill on the river bank in 1816. Shortly afterward he built a sawmill which also was powered by the river. These two industrial plants are recorded as being the first to make use of water power within Wisconsin.

Years later, in 1833, James M. Body came to Kaukauna and purchased a half interest in 400 acres of land on the south side of the river from Paul H. Beaulier. Together they operated a sawmill that the government had built for the Stockbridge Indians, using the power of the Fox.

A third project to make use of the latent powers of the Fox was made by George and Ira Hawley and George Lawe in 1851, when they constructed a mill on the present site of the Thilmany Pulp and Paper Company. They operated it until the development of the navigation canal.

In 1846, before the state of Wisconsin was admitted to the union, the federal government, by a special act of congress, granted a large amount of land to Wisconsin for the purpose of making a navigable route from Lake Michigan along the Fox River to the Wisconsin River. Seven years later the state, after spending $400,000 for improvements, was unsuccessful in its work and it transferred the whole project, including the land, into the hands of the Fox and Wisconsin Improvement Company. That company issued bonds to complete the construction, but, because of insufficient revenue, the company was unable to pay interest on its bonds. Through foreclosure by the franchise, property, land grants were sold to the Green Bay and Mississippi Canal Company.

The Kaukauna Gas and Electric Company erected a power plant here in 1890. During the period of its ownership, it was in continual conflict with the city over the type of service it rendered. Finally an election in the spring of 1911 authorized the city council to proceed to acquire the property. A bond issue of $50,000 for the purchase price as determined by the Wisconsin Railroad Commission was issued. An improvement bond issue of $6,000 for reconstruction needs was also made about that same time. After taking over the plant, the city found it inadequate to supply the requirements of the city and plans were made for a new generating plant and a remodeling of the distribution system.